Process costing is a method of costing used to ascertain the cost of production of each process, operation or stage of manufacture where processes are carried in having one or more of the following features:

However, there are some important differences between job order and process costing as described below:

In process costing Cost of Production Report also called Process Cost Sheet is the key document. At the end of costing period, generally a month, a Cost of Production Report is prepared. It summarizes the data of quantity produced and cost incurred by each producing department. It also serves as a source document for passing accounting entries at the end of costing period. A cost of production report shows:

Cost of production report is divided into five sections. Each section is meant to provide specific information. A brief description of these sections is presented below:

A manufacturing company makes a single production in one department; you are required to make a Cost of Production Report (CPR) from the following data:

At the end of month Raw material 100% completed and Labor and FOH 50%.

The first section Quantity Schedule contains input and output data in terms of quantities. The information is presented in the following order.

Cost Charged to the Department

The unit cost of the equivalent units for a given period is calculated as follows:

Cost Accounted for as Follows

This section shows total cost for which the departments are accountable:

This case assume that company has a one department

Mini Soap Manufacturing units started to incurring cost in first department for 1,000 soaps. At the end of the week 600 soaps were completed and 400 incomplete. 100% of direct material had been incurred. But 75% conversion cost was yet incurred on the incomplete work. Detail of cost incurred by the department as follows:

Heera Manufacturing Company uses process costing to manufactures a product. Production made and manufacturing costs incurred in the first department during the month of October, 2017 are given below:

10,000 units were started in process out of which 9,400 units were transferred to next department and remaining 600 units were 1/2 complete as to materials, labor and overhead. Direct materials Rs. 19,400, direct labor Rs. 24,250 and factory overhead Rs. 4,850 was charged to production.

Required: Cost of production report for the month. Production and cost data of first production department of Excellent Manufacturing Company for the month of January, 2018 are as follow: 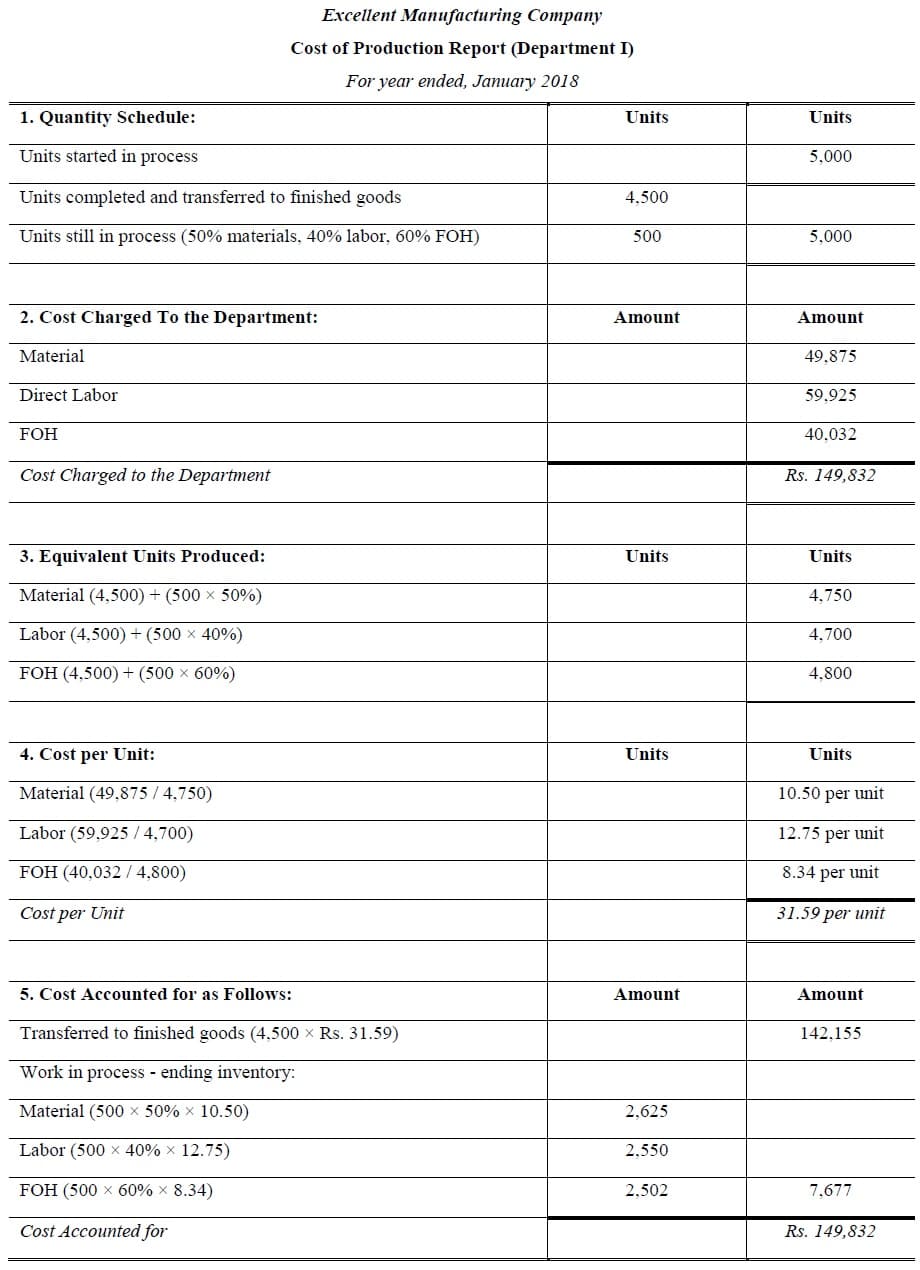 More than One Department Case

Mini Soap Manufacturing units started to incurring cost in first department for 1,000 soaps. At the end of the week 600 soaps were completed and 400 incomplete. 100% of direct material had been incurred. But 75% conversion cost was yet incurred on the incomplete work. Detail of cost incurred by the department I as follows:

Required: Cost of Production Report at the end of March, 2018 for department I and II. 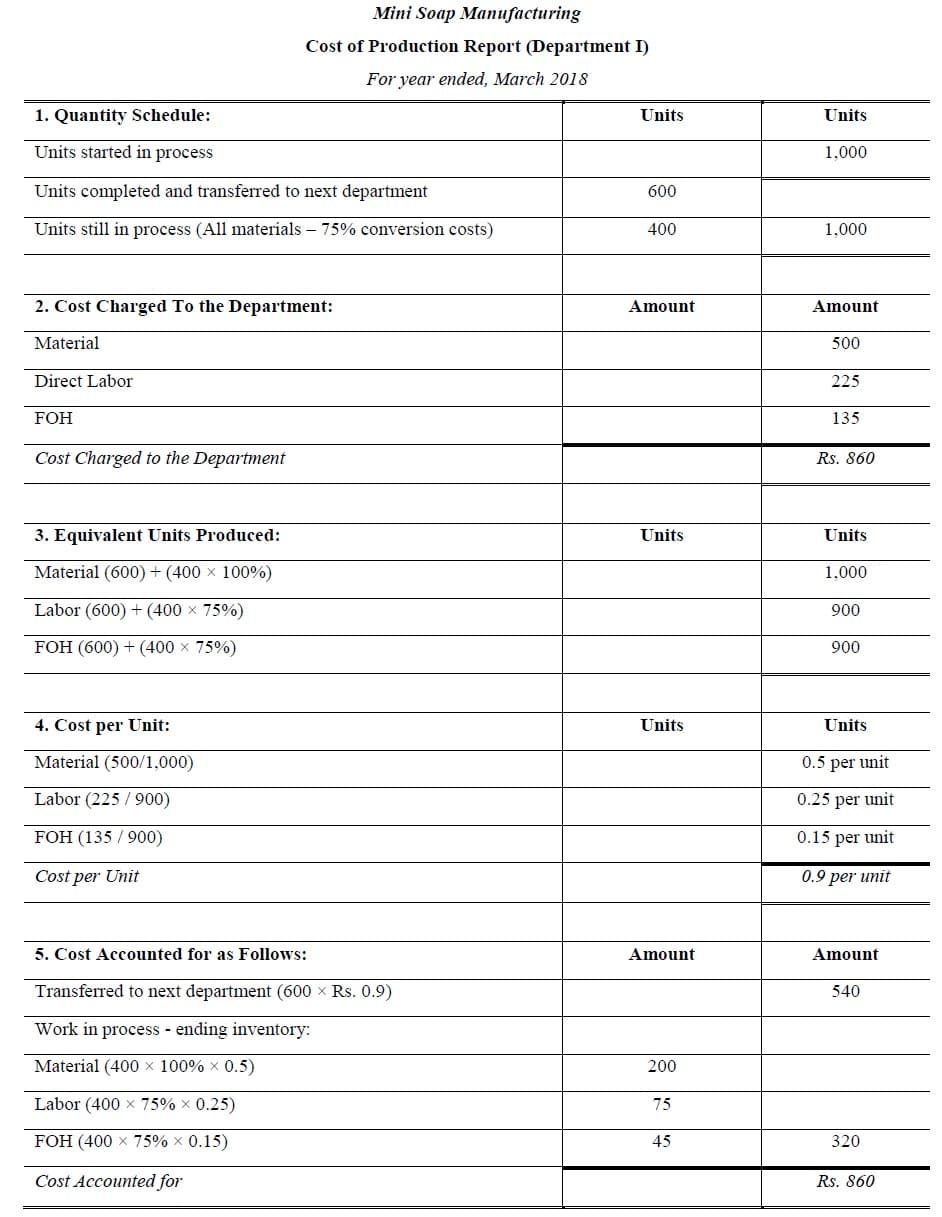 Nadeem manufacturing company produces products. The processing of this product is to be done in three departments known as department A, B and C. from department A the work passed sequentially through department B and C, emerging as finished product. The cost transactions of the company are shown in the following journal entries: 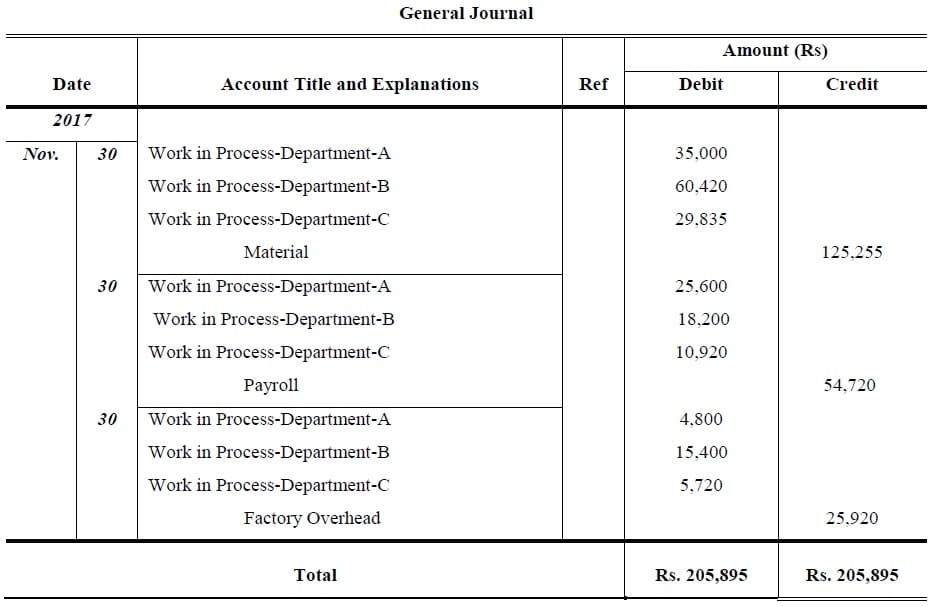 The quantity of production statement for this period appears as follows: 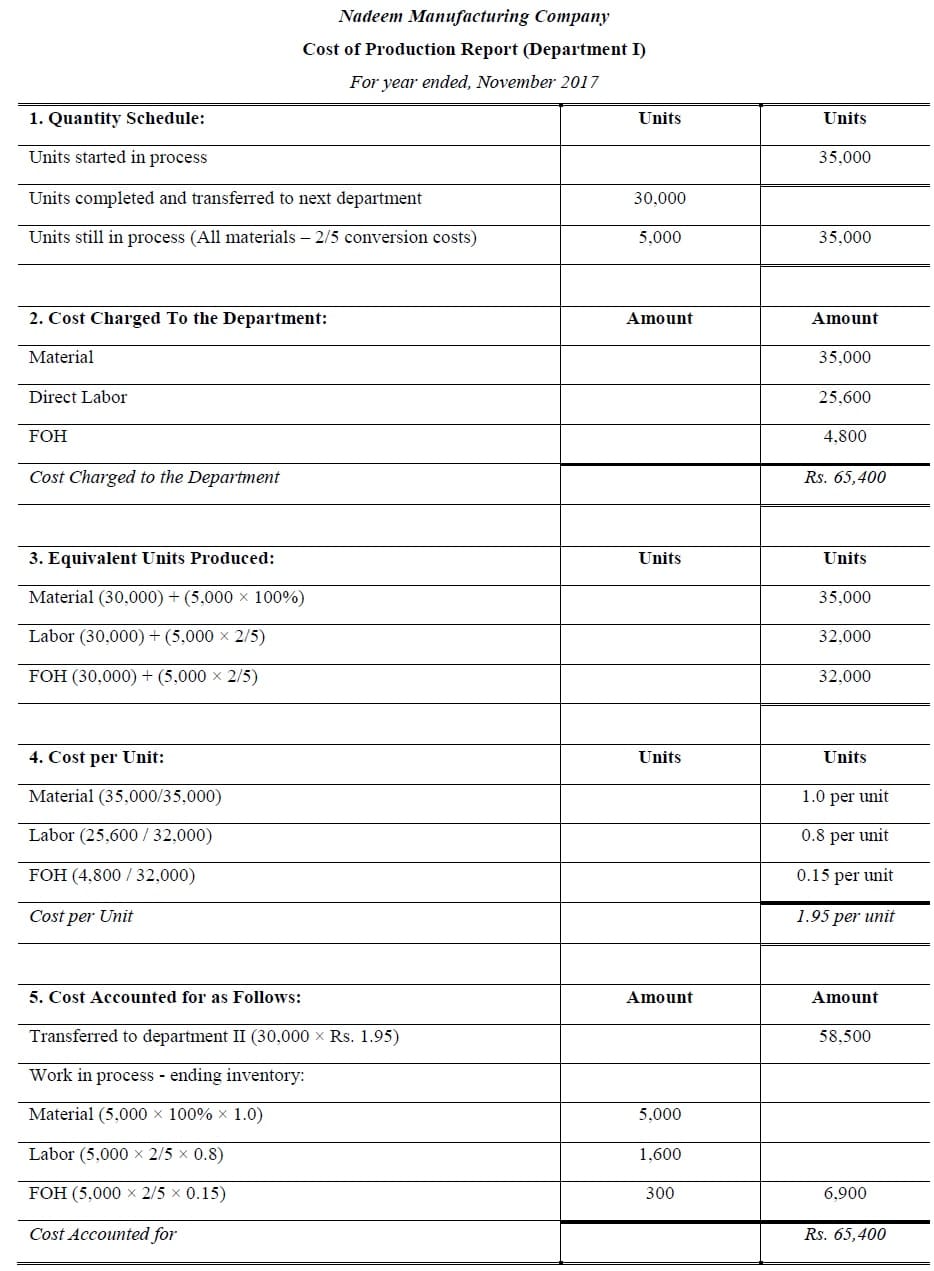 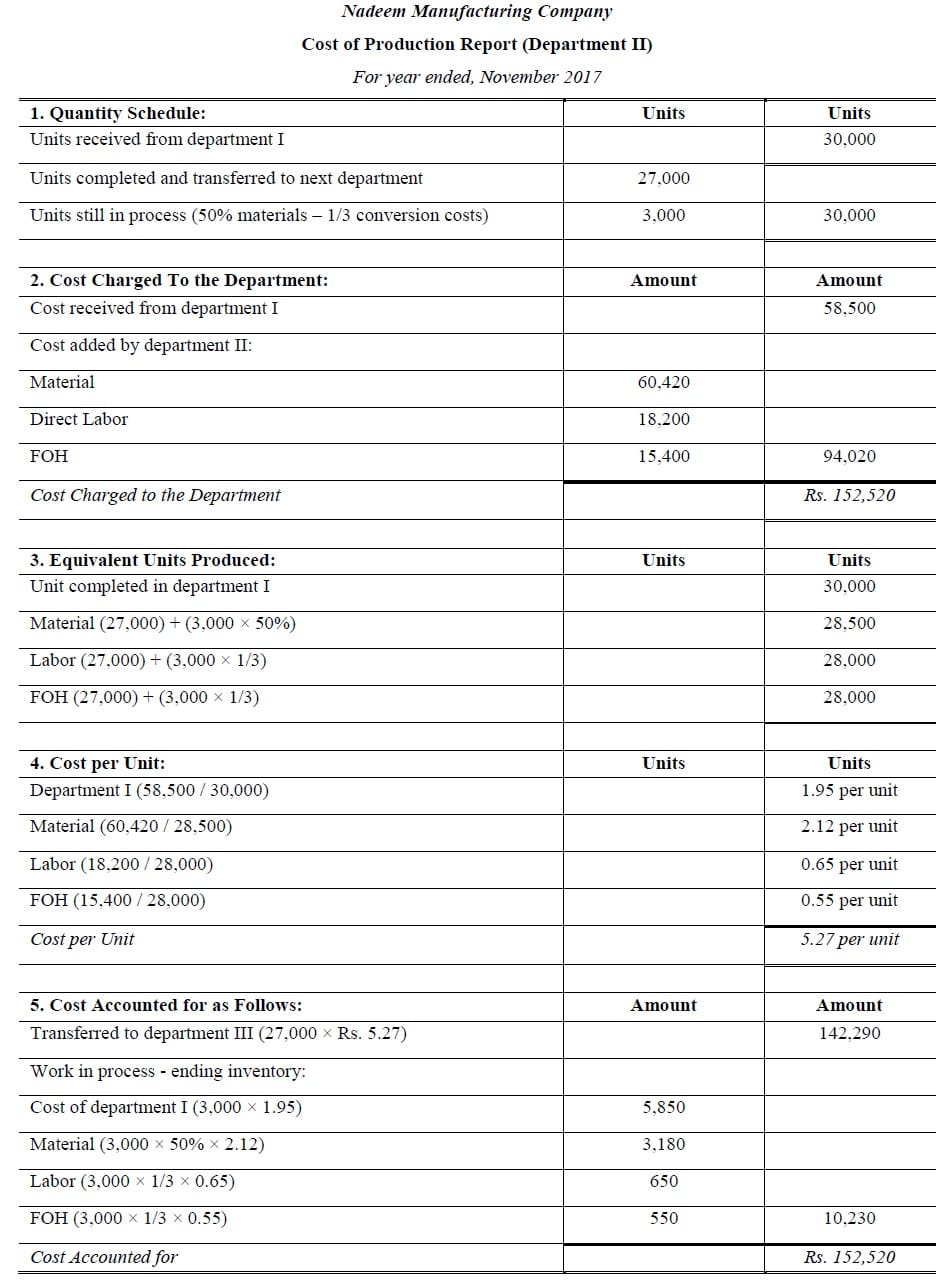 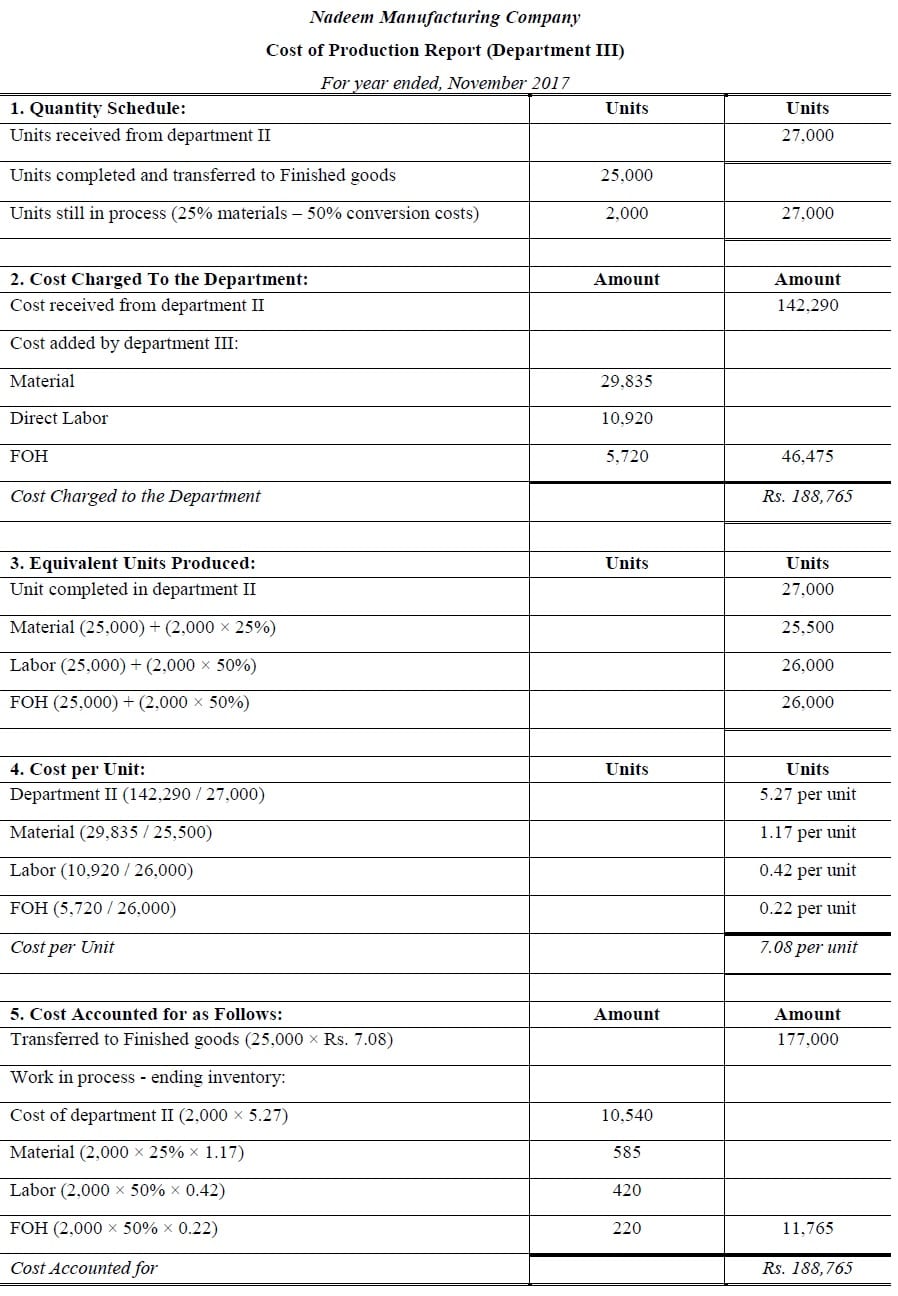 Back To Cost Accounting