Under this system, wages to a worker are paid on time basis irrespective of the quantity of production. The wage is measured on the basis of unit of time i.e. hourly, daily, weekly or monthly. Some of the important time based incentive wage plans are briefly discussed below with practical examples:

(b) Find out Effective Rate of Earnings

Under this method, other things being the same as Halsey Plan, the rate of premium usually applied is 1/3 of the wage of the time saved:

This system is similar to the above two plans. The worker is guaranteed at ordinary rate of wages and premium or bonus is paid in respect of time saved. Under the Rowan system the premium rate is calculated as the proportion of time saved to the standard time allowed.

In order to get premium amount premium rate is multiplied by normal wages. Following are data related to payroll are extracted from the books of Ali Ahmed Khan Ltd: 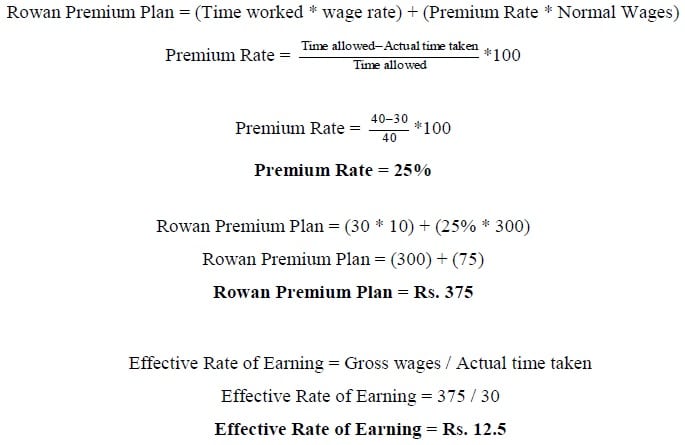 >> Other Practice contains Cost of Goods Sold Problems and Solutions.

Under this method of remuneration a worker is paid on the basis of production and not time taken by him to perform the work. Piecework is where a fixed amount is paid per unit of output achieved irrespective of the time spend.This is one of the simplest and most commonly used of all incentive schemes. The rate is expressed in terms of certain sum of money for every unit produced, e.g. Rs 2 etc.

If a worker produces 25 pieces per day and he is paid at the rate of Rs. 20 per piece, what will be the total wages per day?

Mr. Mohsin Khan is paid Rs. 3.00 for every unit that he produces but he has a guaranteed wage of Rs. 28.00 per eight-hour a day. In a particular week he produces the following number of units:

Calculate Mohsin’s wages of this week?

From the following particulars, calculate the earnings of workers under Taylor’s Differential Piece Rate Plan.

From the following particulars calculate the total earnings of the three workers who are paid wages under the Merrick Differential System.

Output of the workers for the week:

The personnel department of a company has supplied the following information relating to its work force during the month of June, 2011.

Back To Cost Accounting